Revival of the Fittest 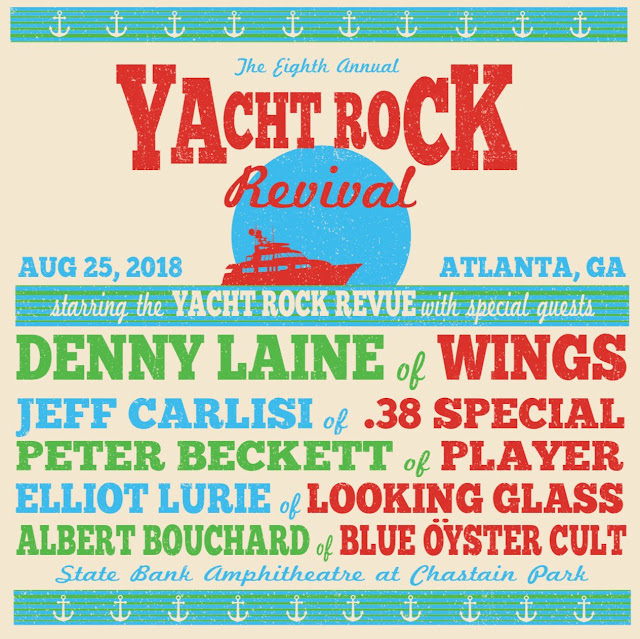 The biggest Yacht Rock gig of the year is the Yacht Rock Revival in Atlanta. This year's show took place at Chastain Amphitheater, and we were fortunate to sell it out (6,500 people)! It was an incredible evening. In addition to the band and the guests, we had Ganesh Giri Jaya on percussion, Keisha and Kourtney Jackson on background vocals, and a horn section of Rob Opitz (trumpet), Bryan Lopes (tenor sax), and Richard Sherrington (trombone). 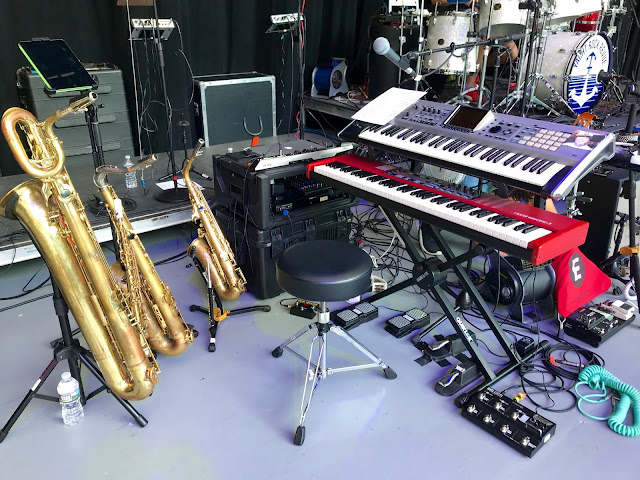 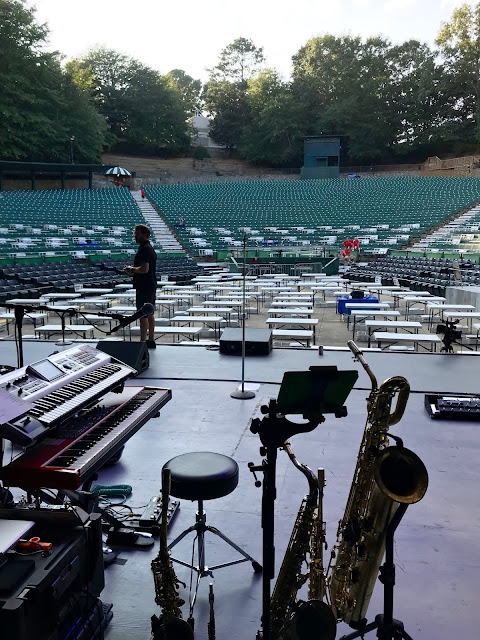 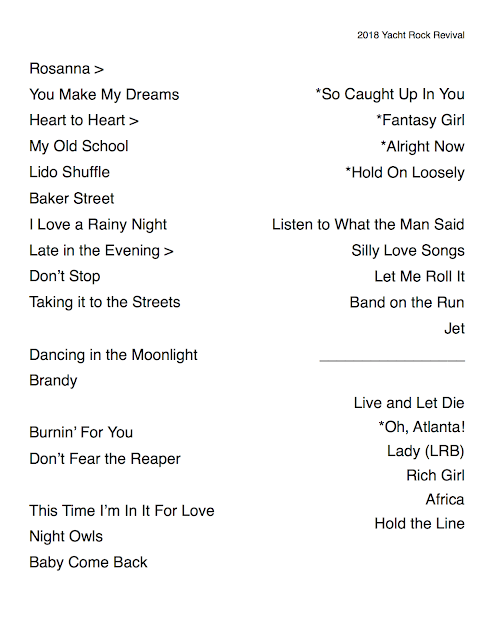 The first block of ten songs had been grouped together at the top of the past six setlists, so we were very familiar with the pace of the opening of the show. At the revival, this definitely felt like the spot where I was able to relax, as most of my major playing was finished at the conclusion of Taking it to the Streets.

Rosanna was all adrenaline--would tonight be a night when the EWI went berserk? two-thirds of the horns were basically sight-reading the charts--would they read it correctly (did I write something stupid?)? would the horns get out of the song in the right place? All good. Everything was fine.

Heart to Heart--everything was good, up until the middle of the solo, when I missed a couple of the high Bs. The rest was accurate, though. Still riding the adrenaline.

My Old School--played bari sax on this. I tried to read a chart off an iPad and not look like I was reading a chart. Successful.

Baker Street--the spotlight is on me. Early in the song, my brain was swamped with the thought of family, friends, and neighbors who were seeing us for maybe the first, second, or third time. It was an emotional moment, and then I had to try and remember where I was in the sax part, and then I had to try not to fall over backwards. Earlier in the week, I realized that the delayed string synth part in the verse changes right before the prechorus. I forgot it in the first verse. I spent the second verse trying to sing the interval that it changes to in my head. I ended up guessing. Got it right.

Love a Rainy Night--glad to be through the Baker Street moment. I coast on this one, singing on the chorus and swinging a tambourine.

Late in the Evening--big horn part. Did we play enough of it at soundcheck to make it solid? Ehhh...

Don't Stop--easy. I sing along in this (I'm not assigned a vocal part on this one), and I wouldn't want to hear what I was yodeling. We were having a good time by this point.

Taking It to the Streets--lots of internal/ego pressure here, trying to impress the aforementioned family, friends, neighbors, but also the horn section with a billion notes and endless slick ideas on that outro solo. Things were going pretty well, and then at some point, I felt like my embouchure kind of cramped up. I mean, it didn't, but in the middle I just needed to take the horn out of my face and swallow and take a good breath, but there was no time for that, and then my solo kind of went to shit. If I could've kept going at the same pace that I'd started, I would've been satisfied with it.

Elliot's stuff--easy. If I usually play the horn parts on Brandy, but there's a horn section, do I still play them? If I don't, will I feel so uncoordinated that I won't be able to keep the organ part together? The answer is yes. Just turn the synth with the horn part down.

Albert's stuff--easy. Not much to do. Obviously, Albert gets the cowbell part on Don't Fear the Reaper, so I took the oft overlooked guiro part (beat 2 of every measure--it's great). I think I missed one because I was concentrating on my background vocal.

Peter's stuff--got it. He likes to do the James Bond lick at the end of The Night Owls, and we simplified it by having only Monkeyboy do it (trying to time it between me, Bencuya, and Monkeyboy was really difficult). Everything else was cool.

Carlisi's stuff--I was backstage, sitting on a couch, looking at my phone. Nothing for me to do. The stars next his name mean that we play it a half step down (he tunes his guitars down a half step).

Denny Laine's stuff--highly anticipated. I played Listen to What the Man Said on soprano, and I was told to eat the mic a bit because it's a bit softer. I jammed the mic right up to the bell of the horn, and it was painfully loud at the show. 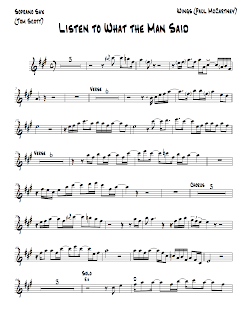 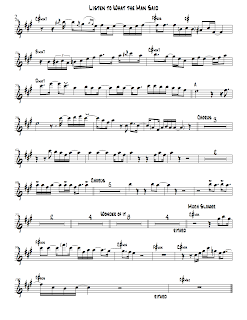 My plan was to play the opening stuff (up to the first verse), and the solo just like it is on the record, and then play my own stuff in between. Fine. Got to the solo, got excited, tripped a little bit. Could've been better.

Silly Love Songs and Let Me Roll It were fine, though it felt like the latter was going to fall apart at some points.

I messed up the end of Jet in rehearsal, so I was really worried that I would repeat my mistake. Got the end right, but I played a wrong note in the middle of the song. Faaaaaaaaaak.

I missed one of the piccolo rips in Live and Let Die.

I play organ on Oh, Atlanta!, except there's no organ on the record, so...can I play any wrong notes? Or, is everything I'm playing a wrong note because it doesn't exist? Cool song. G would've been a lot easier than F#, Mr. Carlisi.

Rich Girl--started in A with Elliot, then moved up to F with Nick. Here it is in C, courtesy of 1976.

Hold the Line. Carlisi was able to handle my guitar part in the album key, so I had a little synth part in the verse and we finished up the night before the curfew.

If you weren't fortunate enough to make the gig, we broadcast the whole thing on Facebook. You can watch it here: