Yacht Rock played the Sundance Film Festival in Utah last Saturday. It was a loooooooong day, faaaaaaaaar away, and I was tiiiiiiiiiiiiired when it finally ended.

Got on a plane in Atlanta around noon... 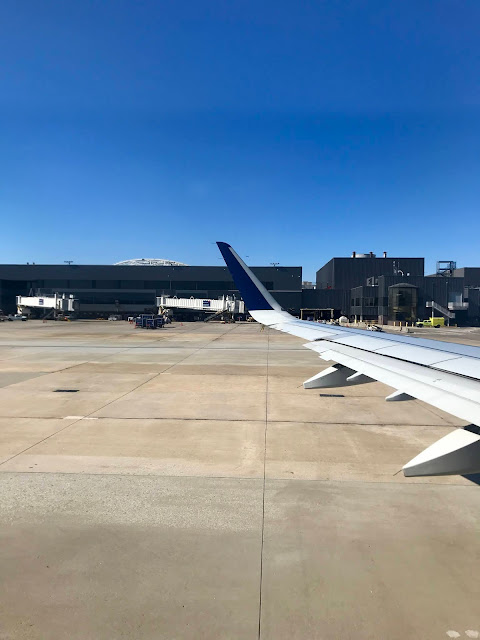 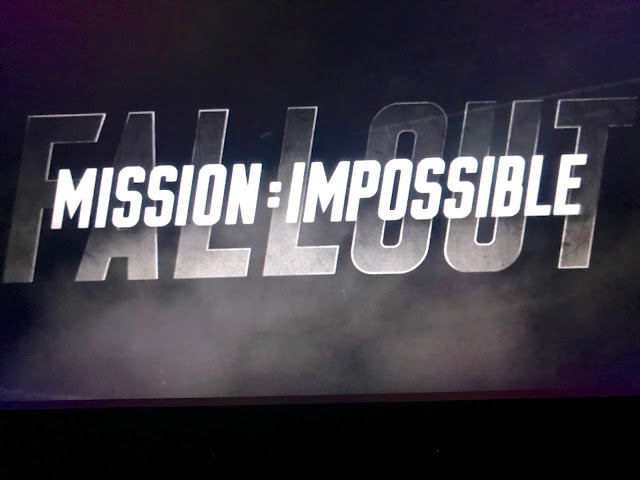 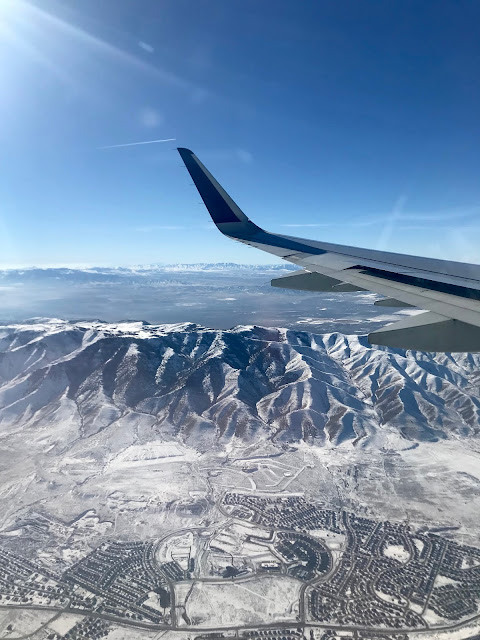 Landed in Salt Lake City three and a half hours later. Got in a van and rode forty-five minutes out of town with our driver dude, who talked to Zach for the whole ride about things like "totally shredding the gnar." We might have egged the conversation on a little, too (brah). 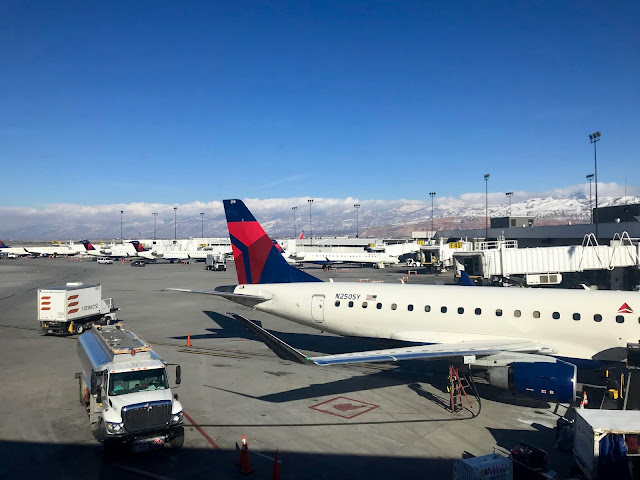 Got to Park City, dumped our bags, and hung out around all of these people who were working/networking/being seen/hanging out. We also ate a bunch of food, and then they brought us the food we had ordered, and we were too full to eat that too. 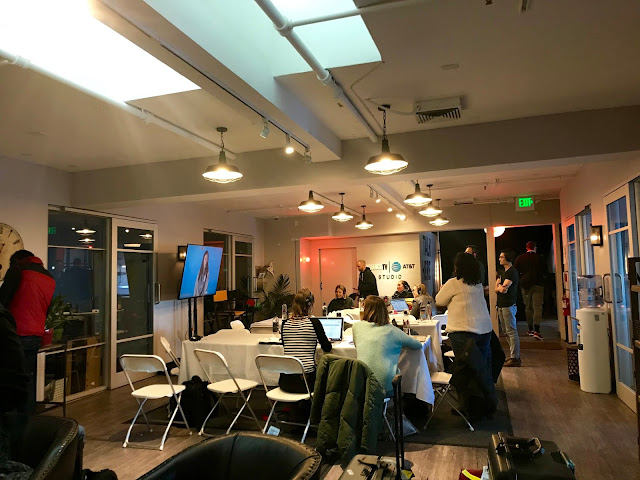 More hanging out. Someone brought a dog (Eckie) to the hang, so we all got a chance to say hi. 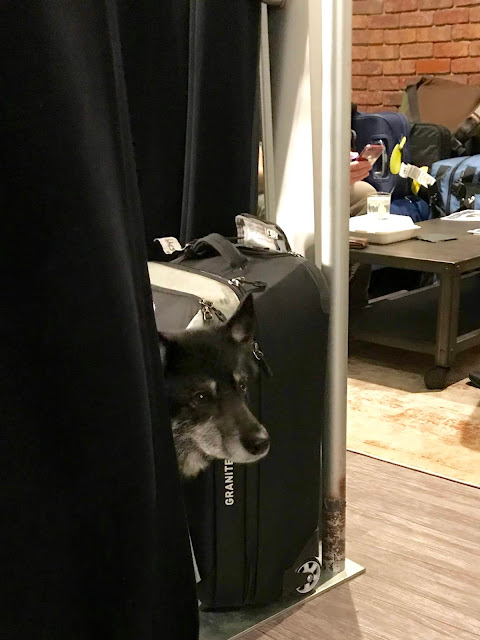 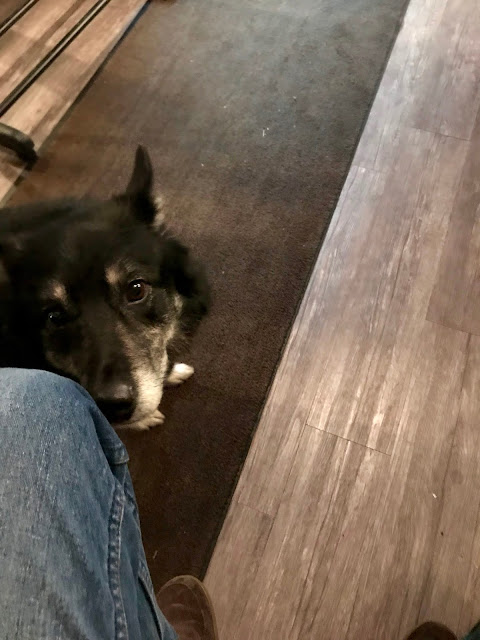 We set up and sound checked, and then went back for more waiting. 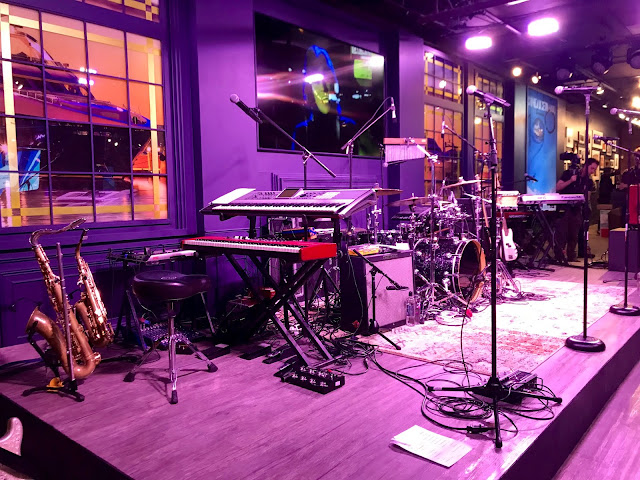 Eventually, it was time to get dressed. 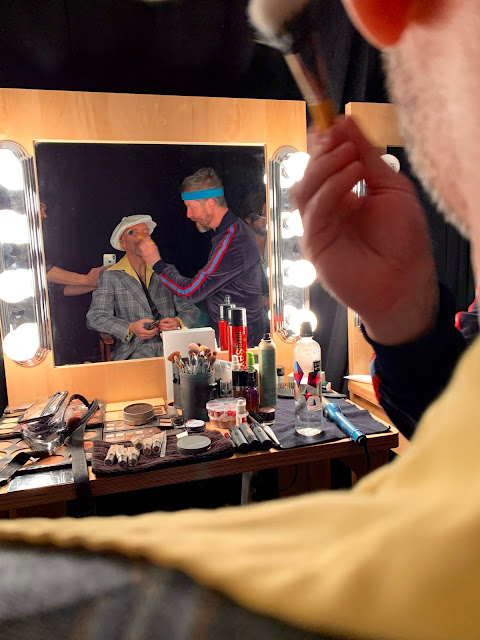 We played the first set. This TV was on a loop playing clips of the Bee Gees, Smokey and the Bandit, the Roseanna video, a few 70s commercials, the intro shots of Dallas, Falcon Crest, and Dynasty (but NOT Fantasy Island), a weird Fleetwood Mac video that looked to be late 80s, the part of Caddyshack where Rodney Dangerfield's boat is out of control in the harbor, a Chuck Mangione Memorex commercial (and I was like "Hey, that sax player (Chris Vadala) just died like a week ago!"), and I don't remember what else. I was certainly distracted, though, which was good and bad.

Guessing what was next helped me pass the time, because holy shit my in ear mix sounded bad. Not a good room for a live band. In spite of that, social media videos show that the out front sound was good.

This was a pretty raging party, if I do say so myself. Definitely didn't feel like a corporate event--it felt more like a house party. 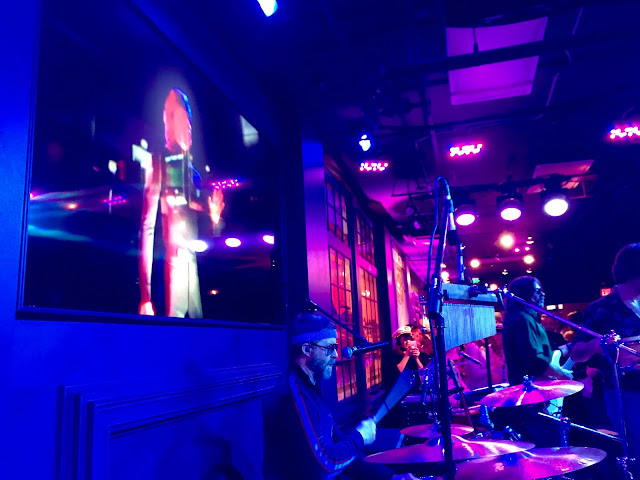 The second set happened, and then we went into overtime, and at some point, my brain started to brown out because it was 1:30 AM inside my skull. 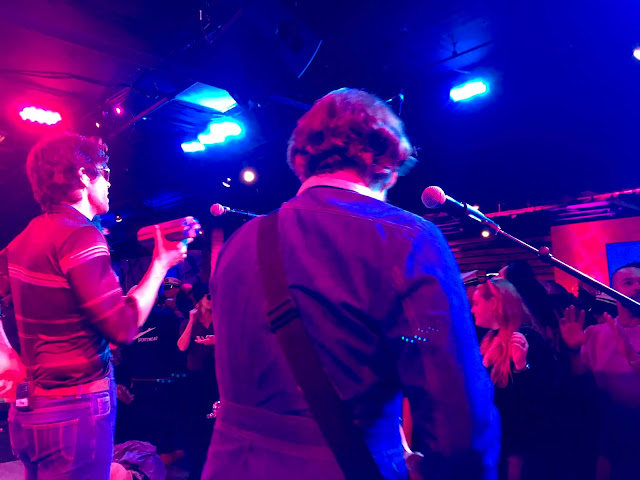 And then it finally ended, we changed, got back in the van, and headed back to Salt Lake City to our hotel. Greg woke me up in the middle of the night because I was snoring like a freight train.

Back to the airport. Bought a shitty, overpriced veggie panini from an SLC airport restaurant. Got on the plane. The rest of Gone Girl was good--it gets a thumbs up from me. I also squeezed in a viewing of Bohemian Rhapsody, which was super damn great, and I managed to get the whole thing in, with the credits rolling right as my row in the plane was ready to exit. Boom. 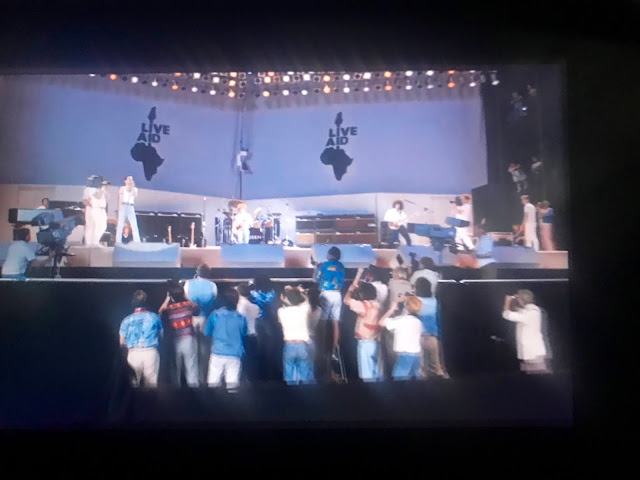 I'm working Wednesday, Saturday, and Sunday, this week, so check back frequently for more exciting moments in my life. OK bye.
at January 28, 2019

The First Busy Week of the Year

This week was our first intense week of gigs for 2019. Monday was the first day of recording some originals, Tuesday was a gig in Indianapolis, Wednesday was another studio day, Thursday was a gig in Florida, and Friday and Saturday were both back in Atlanta at Venkman's.

Monday: We have begun a new project, recording an album's worth of original songs. Day one of recording involved a lot of checking to make sure everything was making sound, balancing mixes, and later in the day, some recording. I haven't been involved in any of this; I spent the day as a spectator. 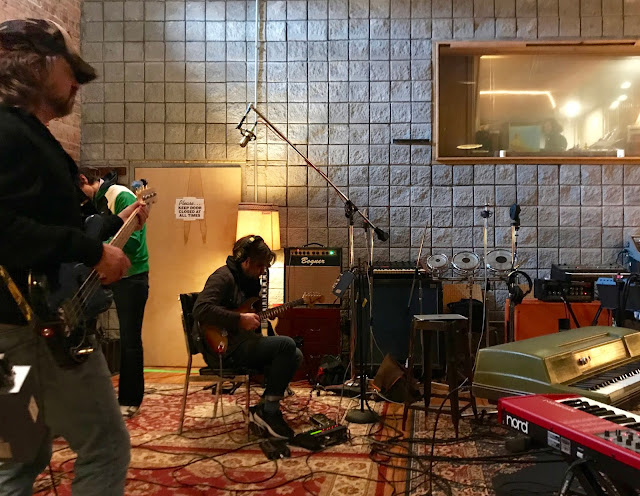 The song that the guys recorded today will eventually have string and horn parts, which I have mostly written. Once my arrangements are finalized, they'll be added as overdubs.

Tuesday: The whole TSA/government shutdown thing cost me some extra sleep, as we decided to play it safe and get to the airport extra early for our flight to Indiana. The traffic on the interstate ended up being more of an inconvenience than the airport, though. No delays in Atlanta or Indianapolis.

I slept like a dead guy on the plane, but was awake for the very hard landing/very soft crash at the end. 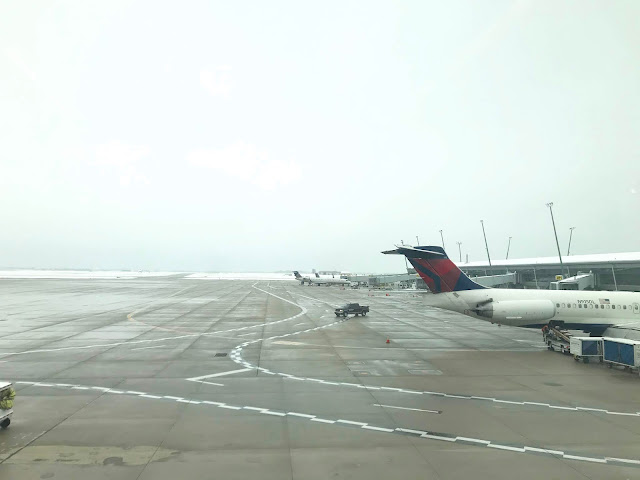 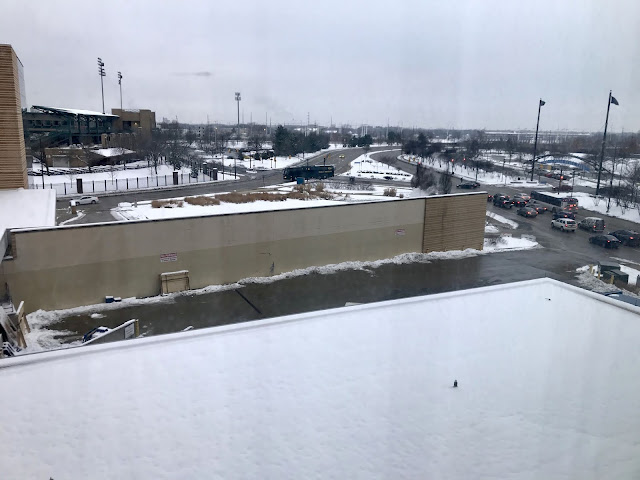 The gig was...something. Five days later, I can't remember anything about it. It was a late developing gig, I guess you'd say--what I mean by that is that we had almost no crowd for the first hour. They softened up a little later on, and we actually went into overtime, which will be a nice boost to the ol' paycheck. More positives: easy load in/out (we used our own gear), good pre gig meal, single hotel rooms, and the gig ended at 9 PM. 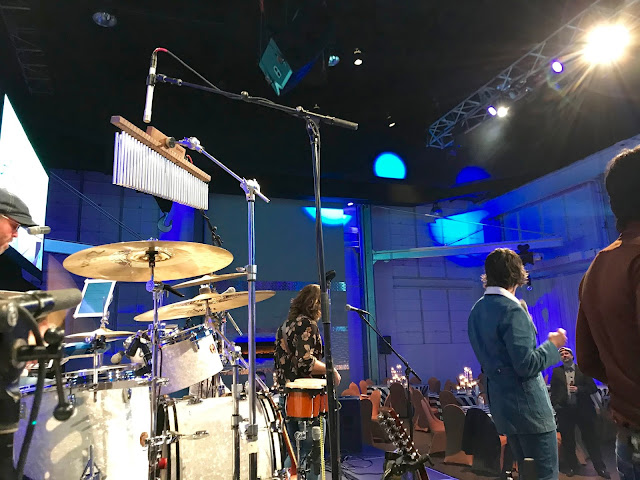 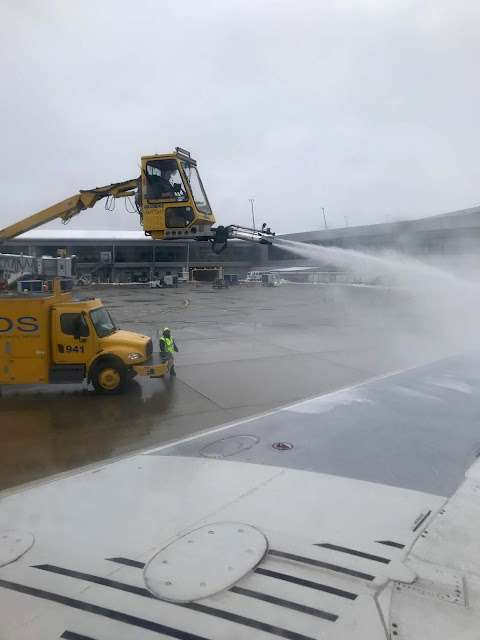 I slept on the plane because that's what I do. I wonder if my hands went to sleep, too, because I had this wild dream where we were playing Baker Street, and I was sitting at my keyboards and couldn't pick up my saxophone--like, my hands wouldn't work--and then I realized that I didn't have my hat or sunglasses on, and I couldn't pick them up either. I looked down and I didn't have fingers or thumbs on my hands. The whole dream kept repeating; it was the two measures right before the saxophone riff starts--the band just kept chugging on the eighth notes while I struggled to get my horn off the sax stand.

So, is the nightmare:

1. I can't pick up my horn to play Baker Street?

2. The band is going to vamp and therefore Baker Street is never going to end?

The rest of the guys headed to the studio after lunch, but after spending almost all of Monday looking at my phone and planning out my pee breaks, I opted to stay home and work on the aforementioned arranging homework.

Thursday: Van ride--approximately six hours down to the Florida panhandle for a gig. We played a show to kick off the 30A Singer/Songwriter Festival. Wrap your head around that one--they hired a cover band to launch a singer/songwriter festival.

Not a bad gig, though. The crowd was decent, the weather (we were outdoors) was just under 60 degrees, and...that's it. It was fine. 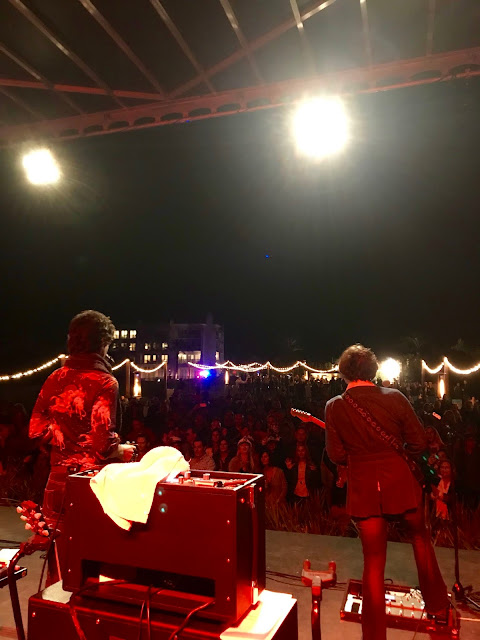 Friday/Saturday: We played two shows at Venkman's back in Atlanta. Both shows were pretty fun. I'm not always a fan of gigs at the V (the small stage, the potentially shitty in-ear sounds), but both of these sounded really good, and neither dragged on and on. The crowd was very good Friday; Saturday felt a little like a throwback to our drunken Thursday nights at the 10 High (which I guess has some strange charm to it).


No load out Friday night after the gig! I put my horns back in the case, but it was kind of nice to otherwise just drive away. 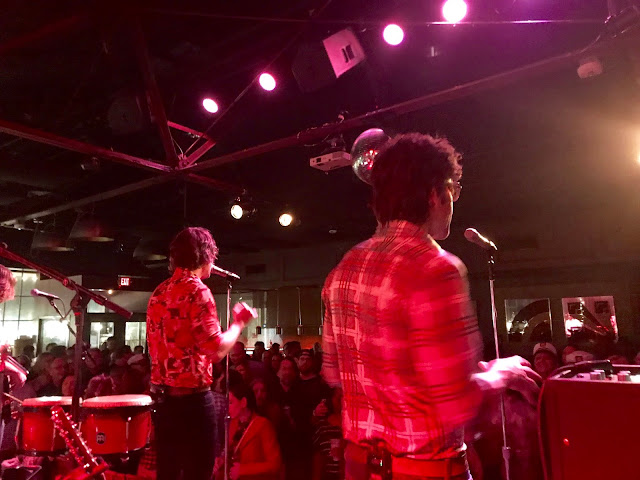 It's funny...things that I didn't practice worked on Friday's gig, but things I DID practice Saturday afternoon didn't stick at all Saturday night. Overall, though, I played well. These shows were surprisingly fun. 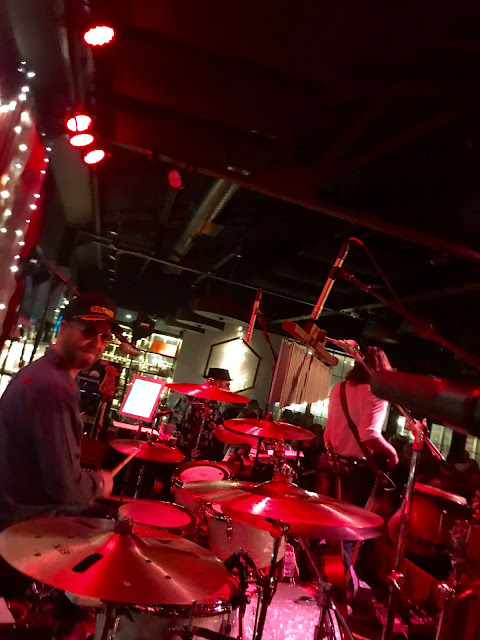 Sunday: Unpacked all my gear, played my church gig, and nailed it if I do say so myself. Thank you very much.
at January 21, 2019

Yacht Rock played the Georgia Theatre in Athens last Saturday night, a sold out show without the drunken football madness. We managed to sell it out for either the third or fourth time. 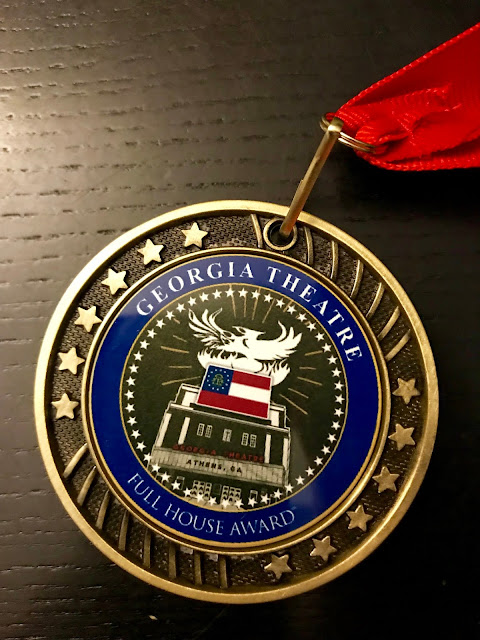 It was good to get back on the horse, gig-wise. My brain didn't start to crumble until the last four or five songs--all of the sudden, I was missing parts and playing string lines that were a fourth away from where they were supposed to be in All Night Long. Raspberry Beret was ok, but then I crashed through most of I'm So Excited, and then snapped back to normal.

In other news, I almost got I Just Wanna Stop completely right. That string part is tough. 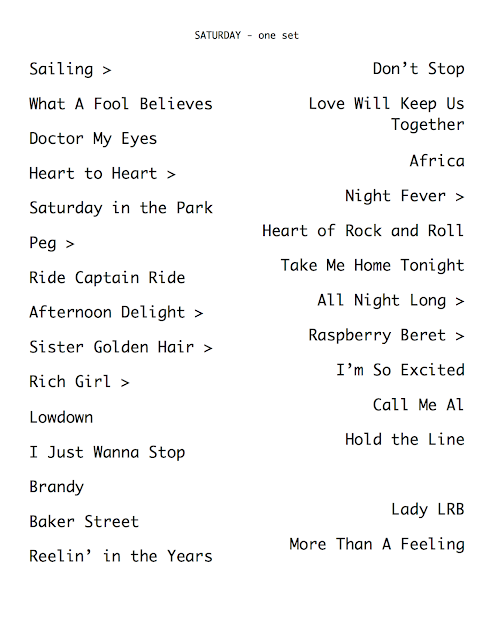 Yacht Rock played a weird corporate gig in downtown Atlanta Wednesday afternoon. It felt like a concert in the food court at a mall. Surprisingly, the monitor mix sounded really good, but the vibe was pretty lame. 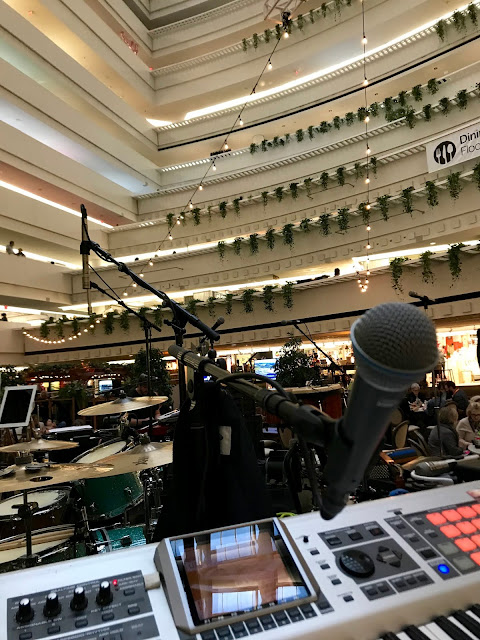 I was thinking about it the other night--this is my twenty-fourth consecutive New Year's Eve gig. Is that a good thing or a bad thing? I guess that if I didn't have a gig:  1. I'd be incredibly jealous of everybody who was working when I was sitting home; 2. probably not do anything different than I usually do--practice and stay up late poking around on the internet. So yeah, I'll take the gig and the money.

Yacht Rock was back at Park Tavern again, where we've played the overwhelming majority of NYE gigs. There's nothing great to say about this one, but it was pretty easy, and it was over by around 12:15 AM. Our gear was even loaded in and out for us. Not a bad night. 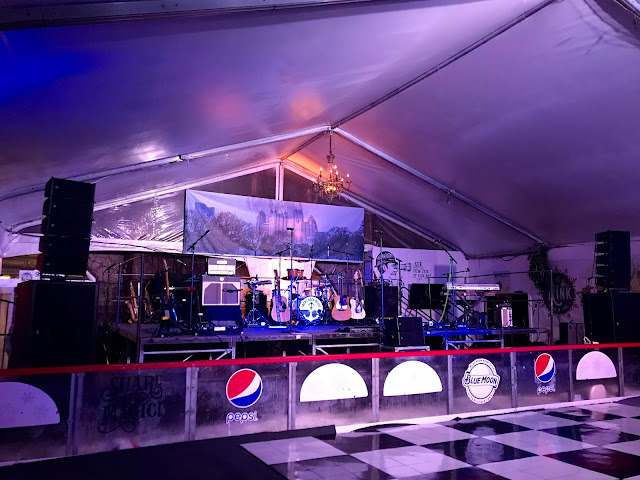 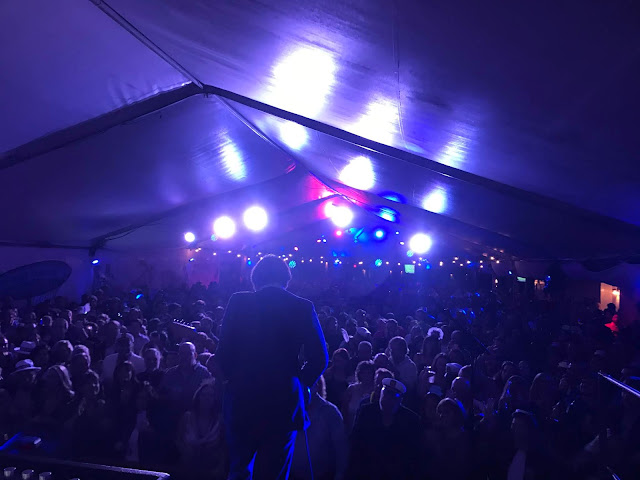