Mojo Workin' and Sittin' In

Wednesday: I was invited to play with Scott Glazer's Mojo Dojo, a monthly gig at Blind Willie's celebrating Scott's love of soul and blues. The band members rotate--this month, it was Micah Cadwell on guitar, Randy Hoexter on keyboard, Justin Chesarek on drums, and Will Scruggs on bari sax (I played tenor). The two saxes thing worked incredibly well with the songs Scott chose, giving it that buzzy old school sax thing without getting in the way of the vocals. 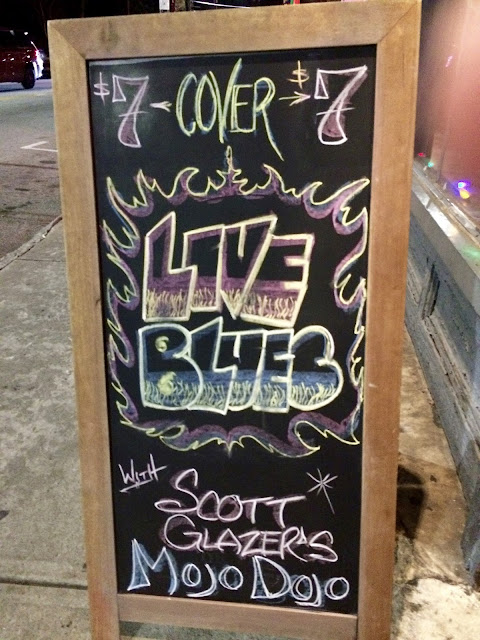 Every time I play this gig, I'm anxious on the way there. To some extent, I worry about sight reading charts in front of other people. My greater fear is the soloing situation--every solo spot is high volume and high energy, and after three or four songs, I've got nothing new to bring to the table! For whatever reason, this particular gig flowed really well, never got too loud, and every instrument didn't solo on every song. Way better!

We were fortunate to have warm weather and a nice full room, too. Great gig.

Thursday: Nick asked me to swing by Venkman's and add a little saxophone to his duo with Tim Smith. They mostly play Beatles stuff, but on this show, they dipped into a little David Bowie. I sauntered out of the green room and straight to the microphone to play on the end of Changes, then stuck around to play on Young American and the Beatles Oh Darling! 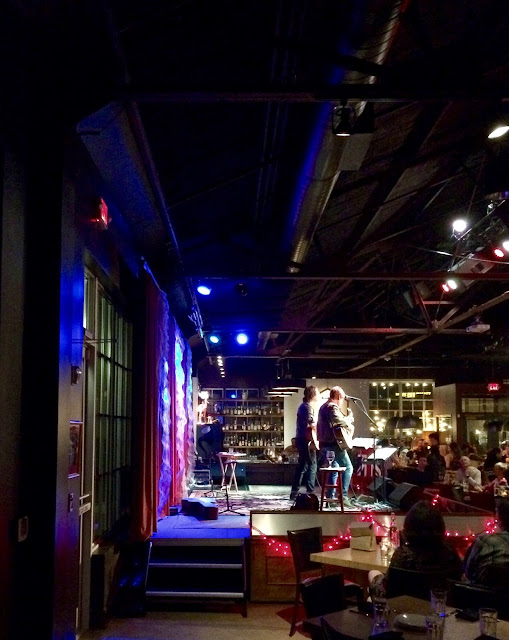 I'd never played Changes before, but (like probably everybody else in the western world) I'd heard it a million times! David Bowie is the only listed saxophonist on the album, so I'm assuming that's him. It might explain why it kind of stutters.

Yacht Rock played a local Atlanta show this past Friday at Venkman's, this time with Peter Stroud subbing on guitar. It was a pretty loose night, carrying on just a touch of the old 10 High silliness, and Stroud did a great job learning the material. 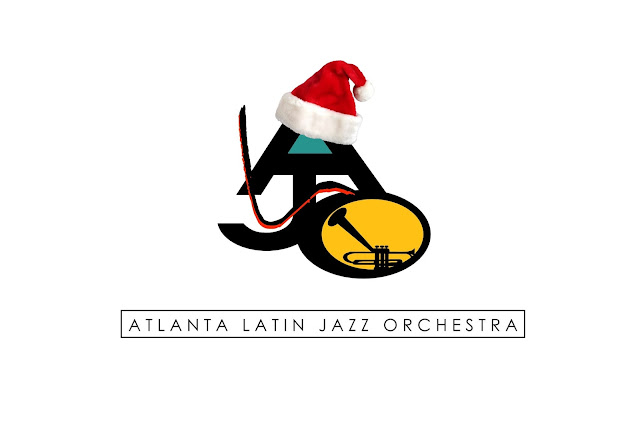 I got to play with the Atlanta Latin Jazz Orchestra last night at Venkman's. It was a huge gig for me because of all the really heavy players in the band--guys I admire from afar (the internet!) were all packed on the stage. Even hanging in the green room was kind of intimidating! They're all out of my league.

Cool tunes, too! I was glad I'd practiced the charts ahead of time, because I'm not a very good sight-reader and some of the music was really difficult.

A few moments from the week of prep:

1. As is the case with most horn parts in Latin music, there's lots of very pointed articulation. My tongue bled a little... 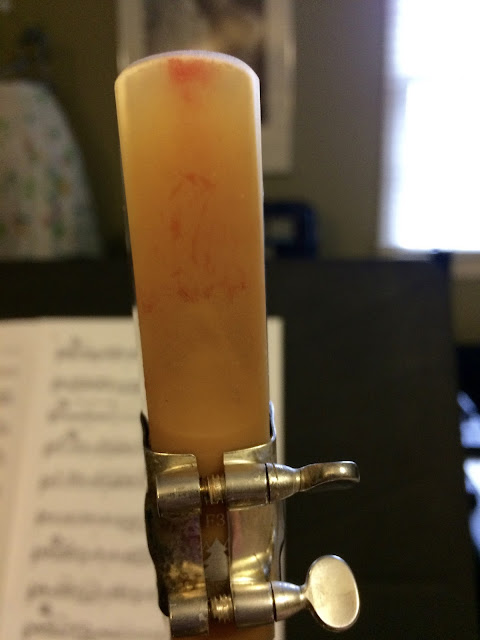 One night I was practicing, and in between songs, the Bb key fell of my horn. Woah! I soon discovered that the post had come unsoldered, and several of the side keys were barely hanging on. 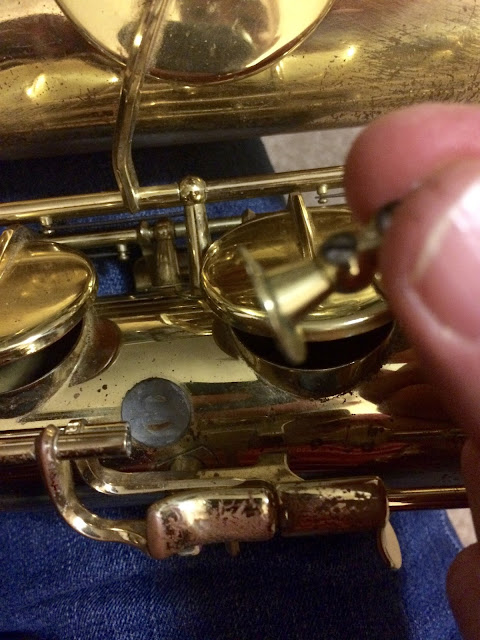 I made it through the night with a new rubber bands, one holding the post flat to the body, and the other pushing up so that the rods would still rotate. My repair guy put it all back together the next day. 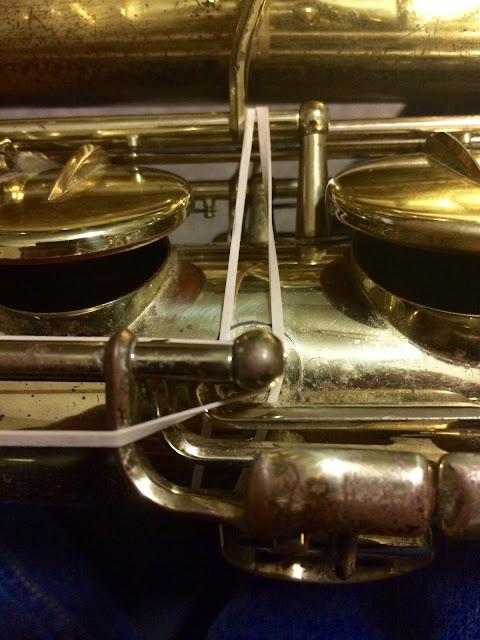 Anyway, the gig went great and I'd love to do it again. 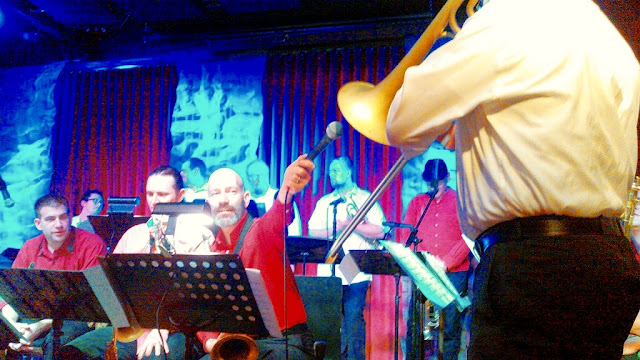 Here's some Facebook Live video in case you missed our show!

One last trip out of town for Yacht Rock--a couple of days in Indianapolis and then a quick return to Atlanta. Behold!

Thursday: We flew to Indiana for two shows, one public and one private. The first was an evening at The Vogue, our midwestern home away from home.

It was a bit on the cold side when we arrived. 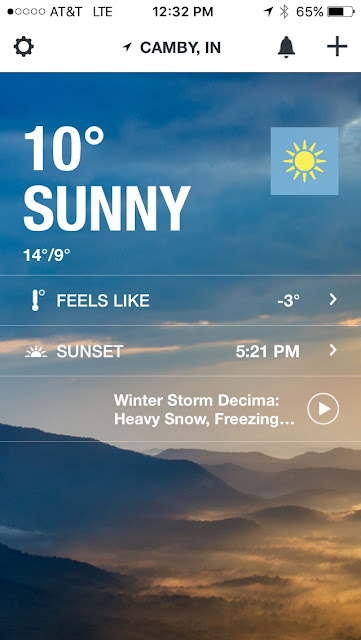 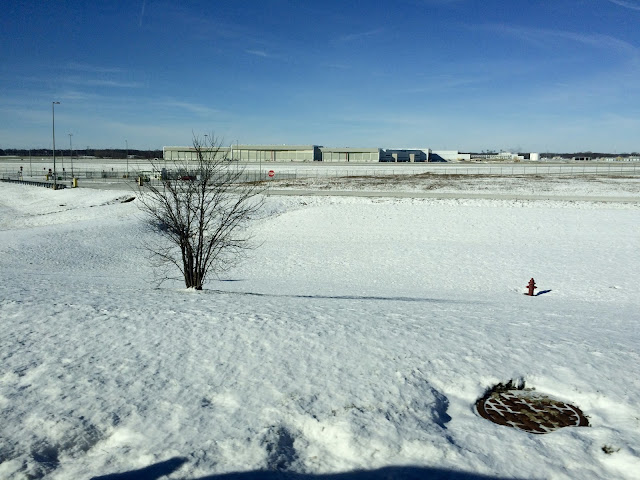 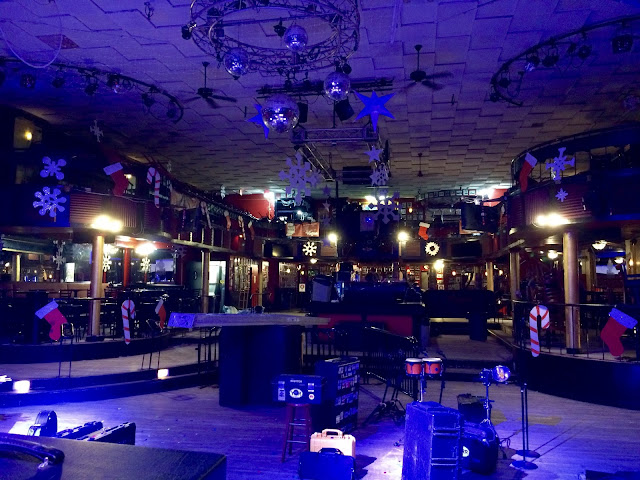 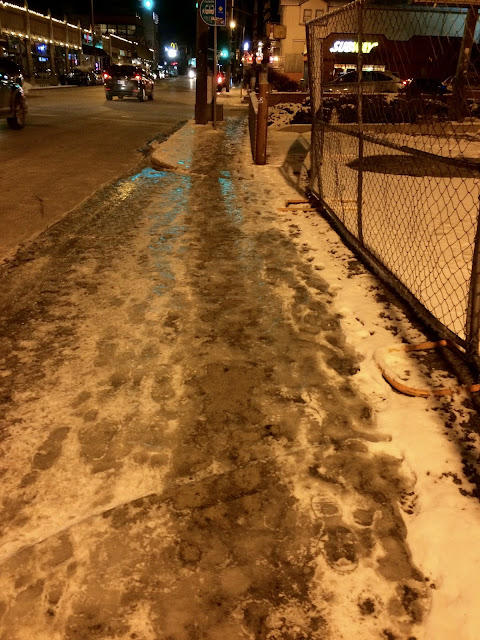 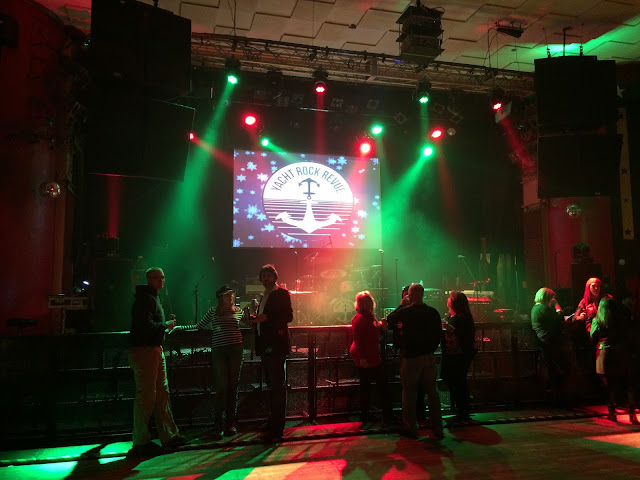 The Vogue show was pretty great. We came within a hundred people from selling it out (on a Thursday night with tough weather!). A week later, I can't recall any specific moments of greatness--just good vibes all around, on and off the stage.

A few of my favorite post-gig tweets... 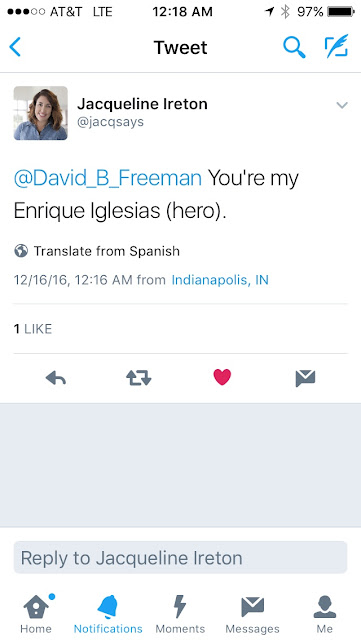 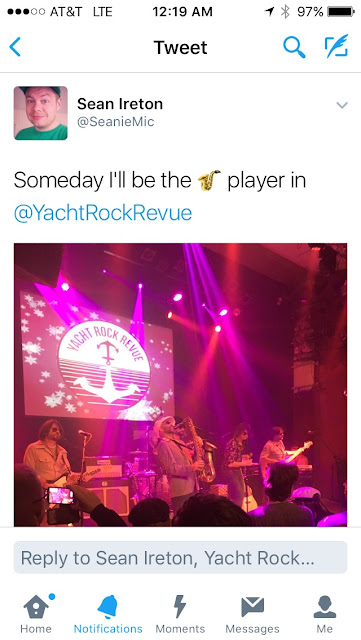 Friday: After sleeping late, we took a field trip to the movies for a midday showing of Rogue One, the new Star Wars movie. Good stuff! I was glad to see fewer of the already established characters--bringing in Han and Leia on The Force Awakens felt a little like they were sucking up to the audience.

Anyway...back to work! Friday afternoon, we loaded into a restaurant for a holiday party in Carmel. 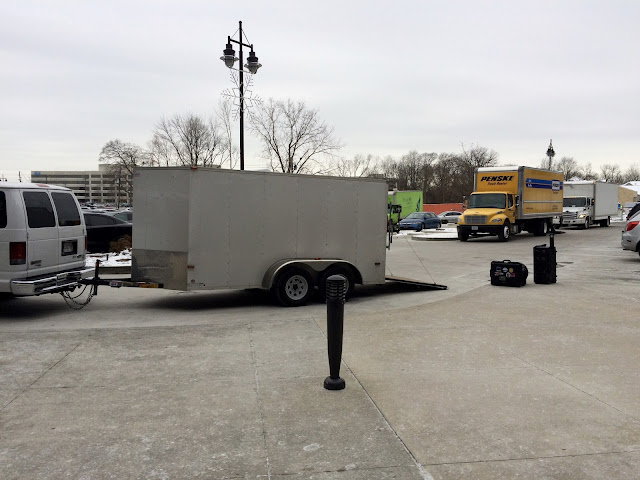 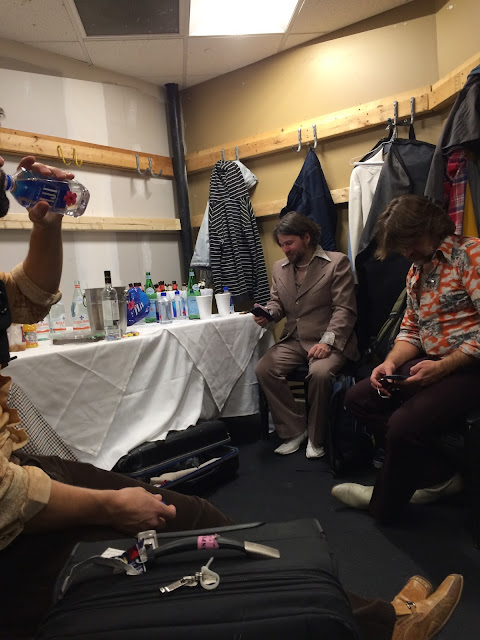 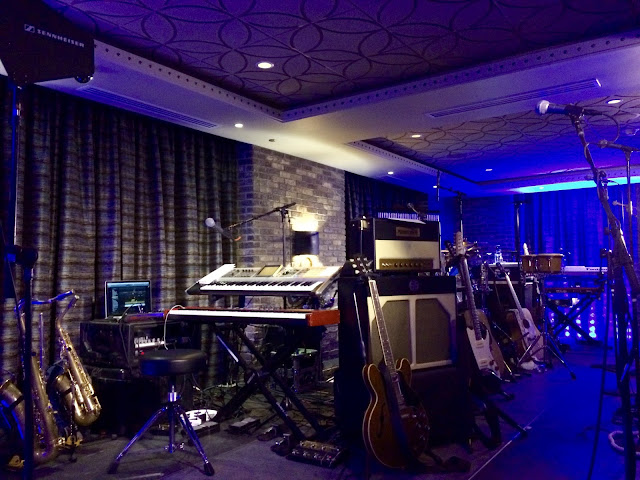 This party was about what you'd expect--nothing too exciting, though the drunk people lingering at the end of the night were pretty annoying.

While we were playing, Indianapolis had been covered in a sheet of ice. Not good for load out, not good for drunk people. The interstates were closed, meaning we had to crawl back to the hotel on smaller roads. The van and trailer left that night for the next gig (south of Atlanta!), and they had to wander south until almost Columbus, Indiana, where the roads were finally clear enough to resume highway travel.

Best of luck to the guys laying tile at the hotel. When we arrived Thursday afternoon, they were installing new tile in the lobby. Friday morning, they tore it all out (and jackhammered the grout off to get back to the concrete slab), and put more tile down Friday afternoon. Saturday morning, they probably (hopefully) couldn't get there to mess with it. 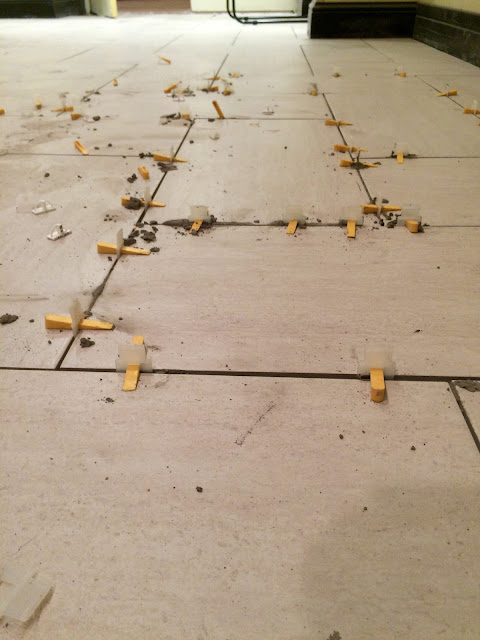 Saturday: We went to bed late and got up early for a flight back to Atlanta. The ice made things exceptionally difficult--our plan of taking taxis or uber to the airport took an extra half hour just to get a vehicle to the hotel, and then (because the roads were still icy), the travel to the airport took nearly an hour.

We eventually made it, with only minutes to check our bags in before the cutoff. To the gate! Unfortunately, one of the two security checkpoints for the airport was closed, and everybody was funneled through the open one. I didn't make it through the metal detector and had to go through the hands-up screener thing, but they had to recalibrate it first. After clearing that, I had to wait for the TSA guy to go through my backpack (the bananas were suspicious?). Finally, I ran back to the other terminal. We were the last guys to get on the plane. I was really glad I wasn't trying to fly with saxophones--that would have been a nightmare. 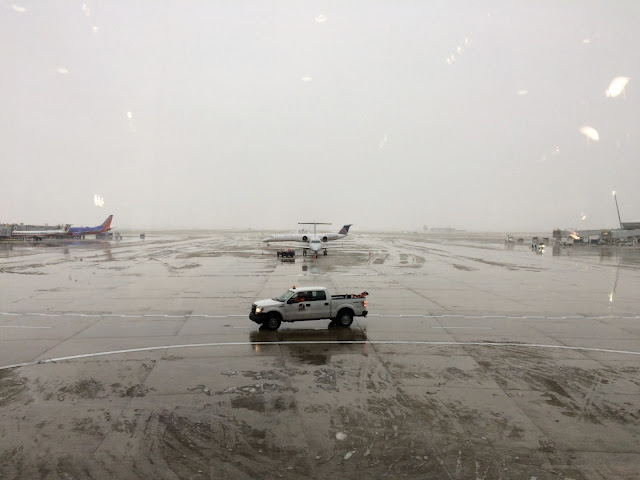 We returned to Atlanta around lunch time, giving everybody an hour or two to regroup before we headed south to Lagrange, GA for a wedding. Easy stuff--the second worst of it was hanging out in the green room for a few hours before we finally went to work. 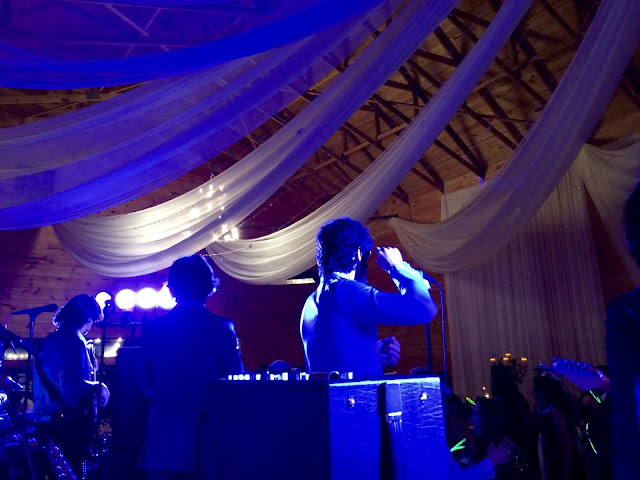 The worst of it was after our performance when the DJ kicked in, which inspired a pretty frantic load out. I drove Nick (who spent the entire weekend in some sort of gastric distress), so we ran like hell to get out of there.

A couple of shows last weekend...the annual Yacht Rock holiday show and an out of state wedding. Let's begin again...

Friday: The big show, the Yacht Rock holiday spectacular. We played to a packed room (within a hundred or so of selling out!) at the Variety Playhouse. I had a pretty good show with the exception of a couple of sloppy moments (i.e. trying to dance, play bari sax, and read a chart on an iPad proved more difficult than it was at home). We used a horn section on about half the songs (Rob Opitz, trumpet; Bryan Lopes, tenor sax; Richard Sherrington, trombone).

Things started in a panic when I walked out on stage and found that the receiver for my wireless microphones was receiving signal. I checked all three horns--none of them were on! Quickly I moved to another frequency and synced all three of my mics.

A few songs later, Lopes' music stand came crashing down off the riser and in between my horns, throwing his music everywhere! Once again, I had to call time out and get things reset. 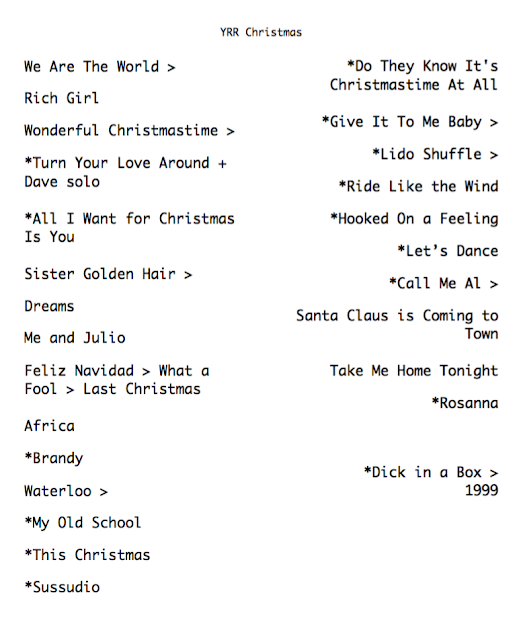 A little video of the evening...


Yay! The gig's over! I packed up, went home, unpacked, repacked, and went to bed.

Saturday: Up and off to the airport, headed to Tampa, Florida for a wedding. Not too shabby. The weather was mid 70s during the day (we were outside next to the water).

Overall, it was a pretty painless gig. Before the second set, however, Bencuya's Nord developed some sort of problem--no sound from the outputs! I gave him mine and we made it through to the end. All kinds of fun. I skipped the afterparty in room 907. She was too crazy. 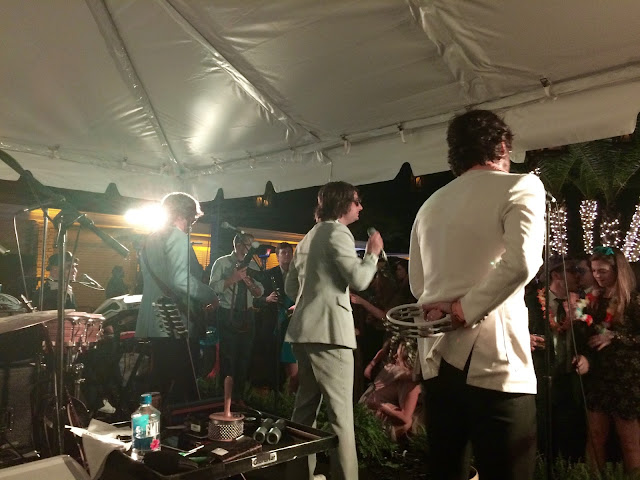 Sunday: Fly home. I watched the end of a movie I'd started on a flight last month. 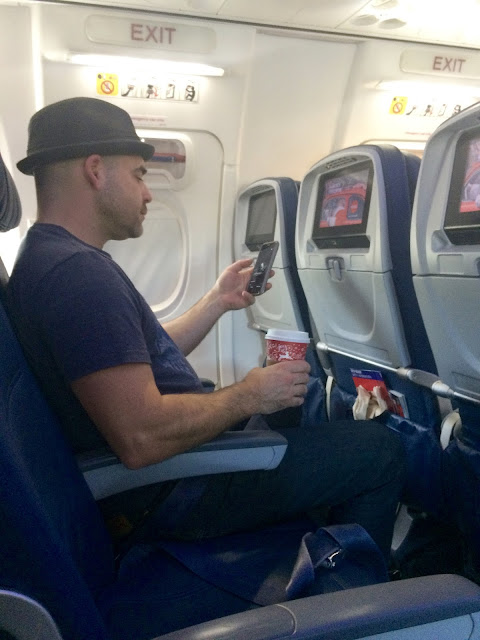 A few more public gigs before the end of the year:

Friday:  We haven't played a Beatles gig in a while, but there wasn't anything new, so it was a little rusty, but not too bad. At any rate, my parts are really easy, so half the challenge is in paying attention to which songs require my presence, and which do not. I play lots of tambourine (which broke not once, but twice!).

It appears that Facebook Live is something we're going to take advantage of from time to time. Here's our show:

Saturday: Yacht Rock at the Georgia Theatre in Athens for a private gig! The sound in my in ears was exquisite. I almost wanted to kiss our monitor guy. Not really (sorry Zach), but the everything was dialed in to perfection, and I had a good night because of it. Even the drive home in the rain was no big deal.


Sunday: Birthday party Beatles show at Venkman's. Almost the same as Friday night, though the crowd was significantly older. They liked it, though! 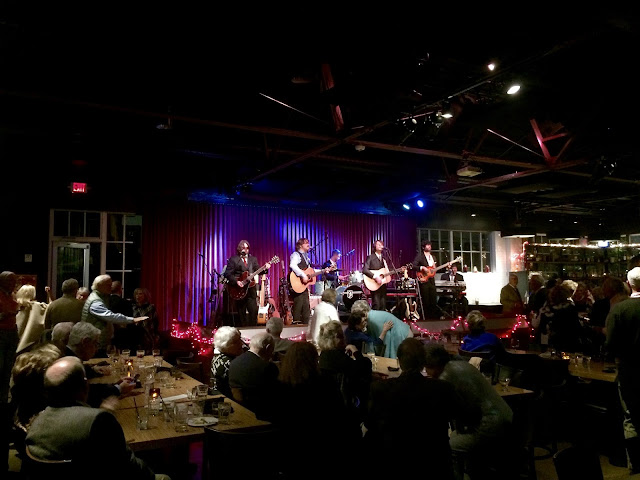 There's a big show coming up this weekend--our annual holiday show at the Variety Playhouse. You can check out a little of our rehearsal from earlier today (Tuesday), also on Facebook Live!